Terming as false the reports that KIA Motors is moving out and action needed to be taken for circulating such false news, Andhra Pradesh government has said that it is still trying to wriggle out of the financial mess created by the previous TDP policy of indiscriminate borrowing and spending.

Speaking to reporters here on Thursday, State Finance Minister Buggana Rajendernath said it is very damaging that such irresponsible reports are being circulated in the social media to mislead the people for which a system has to be evolved to stop such false propaganda. 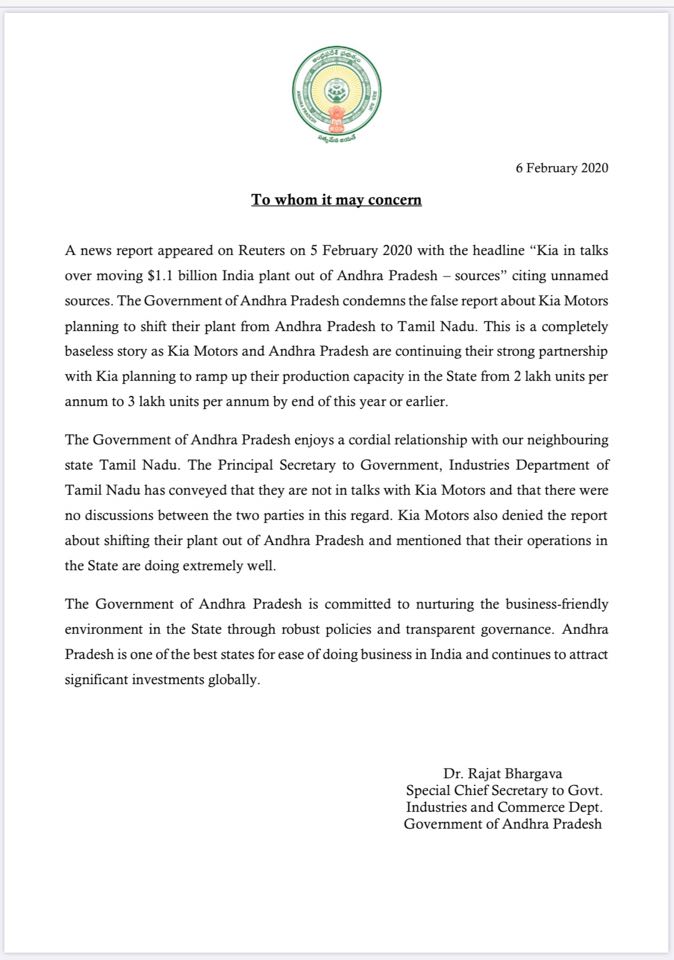 He said Kia Motors started its unit in Anantapur district in 2019 with an investment of Rs 14,000 crore. The Kia management has retorted by saying that there was no truth in such baseless reports. National head of sales and marketing of Kia Motors, Manohar bhatt has said that the news report shocked us. It is shocking to see such a report when our plant in AP is doing extremely well. It is the worst formation of imagination and concoction. I don’t know who is behind this news.
The Finance Minister said Kia Motors was considering expansion in the Indian market and does not have any plan to shift the facility from the current location. Is such falsehood in the media about the manufacturing unit utter mischief, he asked.
Chief Minister YS Jagan Mohan Reddy had recently visited the plant for its inauguration. The management was so happy about it and even the Ambassador of Korea to India had personally expressed happiness over starting the plant here. Their demand for an under-bridge on the road near the plant was accepted by the Chief Minister and he extended full cooperation to the plant in whatever requirements they desire to have, the Finance Minister said.

The minister quoted another report in the social media which claimed the Conduent company in the Millenium Towers in Visakhapatnam was asked to shift from there by the government, which is also false. No instruction has been given by any department regarding the issue, he added. It is high time to take some preventive action against such false reports being circulated in the media because it very damaging for the administration itself.

With reference to allegations by opposition leader N Chandrababu Naidu that the economy was in doldrums after the YSRCP government took over, the Finance Minister said unlike the previous government, the present government was not advertising on the efforts being made by it to promote industries. It is just maintaining a low profile and doing its work. He said the APIIC has allotted 1,057 acres was allotted to 1252 companies after the present government took over.

Grasim Industries of the Birlas, Smart Chemtech, ATC Tyres, Triamonium Nitrate, CRRC corporation and Metro Coaches have set up their units in the state. Negotiations are under way with major units of Hyundai Steels and Posco Steels to set up their plants.

He said Chandrababu Naidu has left the present government with works worth Rs 38,000 crores to be completed. If the CRDA is included, the amount increases to Rs one lakh crore. This was done without any financial backing. Pending Arogyasri bills could be updated by the present government till December last. Loans were taken from the Discoms by Naidu government to fund Chandranna Kanuka scheme, which are being cleared now.

The Finance Minister asked with this kind of burden left to us, how can Naidu say that we have done nothing and that the AP economy is in jeopardy?